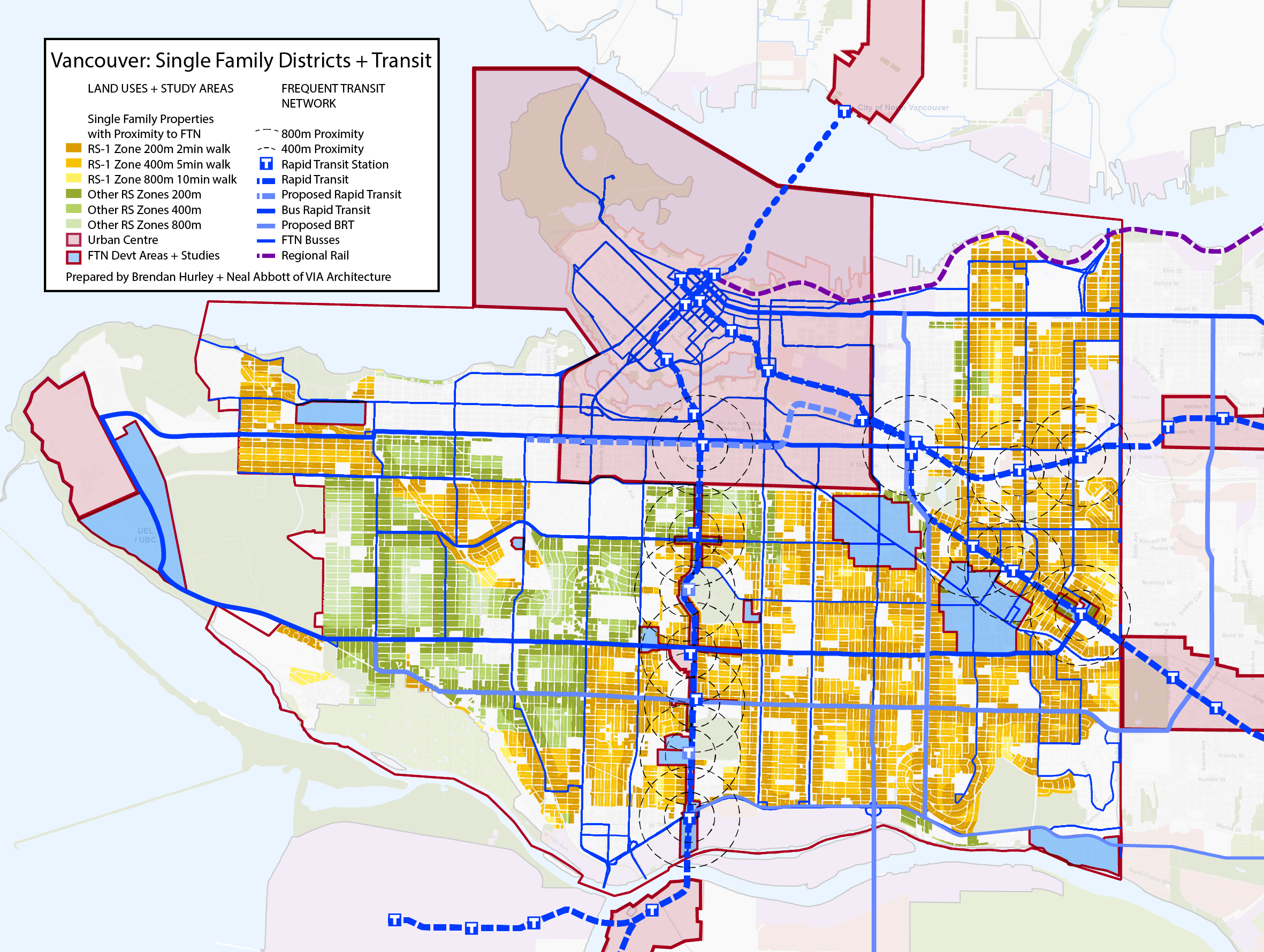 There is no question that Vancouver is a densifying city. Despite all the excitement and acrimony that comes with that prospective change, the majority of its land is still locked into single-family housing zoning districts.

On Wednesday, January 20th, the Urbanarium presented a panel of players of the region’s development past and future to debate one of the most powerful and unasked questions surrounding Vancouver’s future density: should we open all neighbourhoods to densification?

In the midst of that debate, we wanted to visualize and analyze some of the impacts that single-family housing districts have on Vancouver’s form and structure.

The question of whether we can do better by this land, its owners, and the people who want to have the opportunity to live in these neighbourhoods is a serious one. The visual impact of the single-family zoning parcels shown in the map above, created by the VIA team, displays, rather quickly, how much of the City is still officially zoned as single-family.

The map of the City of Vancouver (shown above and repeated below) breaks down the most common RS1 One Family Dwelling District in orange and all other RS Single-Family Zones in green. This analysis also takes into account that many of these neighbourhoods are transit-oriented, despite their official low-density designation.

Single-family housing became near ubiquitous in the interwar period. The City’s farm land was divided out along the grid of streetcars and developed further and further southward with new tracts of housing. The surveys that defined properties for this grid were similarly focused on a streetcar suburbia.

Outside of the early City’s Victorian core and some of the post-war ranch properties in the south of the City, most of this grid was divvied up into regular chain (66ft or ~20m) lots and blocks. Depending on configuration, that meant that the most common type of lot in the City was a half chain (33ft or ~10m) wide.

Lanes divided almost every block; most were and were 20ft (or 6m) and most blocks were four chain deep. That meant that the most common development lot in the City had a shared scale of approximately 33ft x 122ft (~10m x ~37m). There are variations, but this lot type is almost ubiquitous.

The types of allowable housing on these subdivided lots changed drastically, and some of the beloved forms we now protect as heritage have been made illegal – many times over – with new restrictions on those codes. The fast-paced and concentrated development pressure spurred on by the streetcars was quickly released in the post-war era with broader car-oriented suburban development across the region. The most common zoning regulation on these lots was based on the singular faith that single-family zoning in lower densities was a deterrent against slums and the negative elements of the then-industrial city.

For the last number of decades Vancouver has become a model of master-planned density set along a connective transit system. Redevelopment and reinvigoration of the urban core and the creation of new neighbourhood and town centres along transit corridors has branded Vancouver as a city of density. However, the power and persistence of the single-family zoning districts still has a vast impact to the shape of the City. Outside of specific core and study areas, Vancouver remains largely dominated by this typology.

Vancouver is a transit-oriented city that has a near-complete grid of frequent transit corridors – most of which were set into place in the streetcar era. It is rare for properties to be more than 800m– about a ten minute walk – from one of these transit routes.

Yet, it is easily observed that, beyond some directly-adjacent commercial districts and a few neighbourhood planning study areas, much of the land base crisscrossed by this transit is still dominated by single-family district regulations. Precincts around stations and transit are powerful places to increase densities and maximize transit use, but what about the rest of the City?

Looking toward a more connected and complete city, it makes sense to begin by analyzing how this relationship between single-family housing and transit were interrelated.

Rough analysis in GIS calculated about 67,700 single-family zoned dwelling parcels in the City. It will be noted that these numbers are rough but have been “corrected” to remove large parcels – often parks and schools remain RS1 even after their use change – and small parcels that could be vestigial segments of subdivided properties and streets. The RS1 One Family Zoning district presented in shades of orange represents approximately 51,900 parcels. While the remaining 15,800 parcels presented in varying greens represent the other RS2-RS7 Single-Family Districts’ properties.

The map presents the network of frequent transit routes expected in the City over the next few years and highlights the routes presented in both TransLink and City of Vancouver transportation plans. Major rapid transit stations on the existing SkyTrain have been marked and five-minute and ten-minute walking circles have been overlaid onto the map.

It is striking to see how many lots of single-family housing are present within these station areas. Areas outlined in blue are either frequent transit network development areas or planning work currently underway or completed by the City to create new transit-oriented multifamily zoned urban centres.

This analysis looked at the amount of properties within certain walking distances to frequent transit to see how much of the “Single-Family City” is actually located within reach of transit-oriented corridors.

At 800m or a ten-minute walk, we found that 67,600 or 99.8% of the single-family lots were represented. This number suggests that almost all of the single-family housing is within a reasonable distance from corridors to be considered transit-oriented. Often, this limiting distance is the outer edge of a transit area plan. Here, it is represented in the lightest shades of orange and green on the map.
A five-minute walk is considered to be the distance from transit at which people are most likely to consider it a part of their daily routine. With 65,100 parcels within this 400m distance, we can consider 96.1% of the City to be within range to be considered oriented to a frequent transit route.

In order to look at direct integration with transit, we added sites within 200m of a transit corridor. In essence, these are sites that are less than a block or two from a frequent transit corridor. They are presented in the darkest of our colour range and account for 44,800 parcels. We consider these single-family lots to be directly oriented to transit. They represent 66.1% of the total set of RS-zoned lots in the City.

Vancouver is a Connected City

With the vast majority of lots within an attainable transit catchment, the City of Vancouver’s single-family zoned lands can be considered connected. The connective tissue is there to have our city look at a more urbane future. As the debaters on Wednesday presented, how this moves forward will require tact and a skillful balance.

However, the debate of how to treat and what to do with these lands is now at a place of evidence to take place. From it the long overdue debate about what kind of city we want to live in can truly begin again.